There are two reasons why this could happen:

If someone places a bid that’s the same as the maximum of another bidder’s auto bid, the auto bid will place its maximum bid.

And because the auto bid was placed first, that will be considered the higher bid.

The same is true if two people set auto bids with the same maximum.

They will both reach the maximum bid together and whoever placed the auto bid first will be considered the higher bidder.

When bidding in different currencies

If bidders are bidding in different currencies, we convert them back to euros to determine whose bid is higher.

This conversion can lead to small differences in the bid amounts.

If the difference is less than a euro, it will look like both bids are the same amount because we don’t show decimals in the bid amounts.

In these cases, the higher amount will always be considered the higher bid. 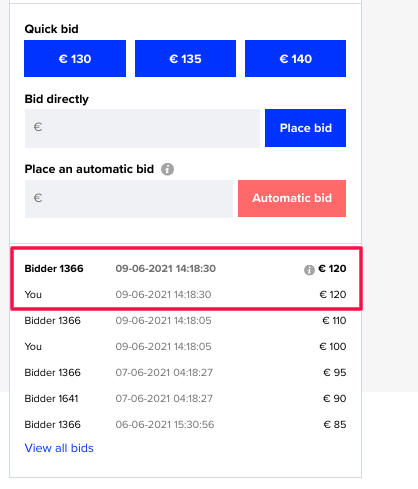