A brief history of Dutch Design

Upon hearing the term Dutch design, one might be confused about exactly what qualities it references. This article presents a brief history of Dutch design, its art historical roots, its contemporary status, and relevant artists of today.

Many of our aesthetics and design-related expectations might have been influenced by this contemporary style. It is characterised by simplicity and functionality, characteristics that can be found in the much-loved Scandinavian style. Thus, this article will also explore whether we can still talk about an exclusively Dutch design in such a globalised world. Spoiler: as long as we acknowledge the designers that started this trend and the works that directly influenced the style, we can. The history of Dutch Design

The term “Dutch design,” in its contemporary sense, is directly linked with a group of designers and artists who made names for themselves between the 1990s and today through their visual proposals. In the current debate, curator Ingeborg de Roode raised the issue of the term by asking to what extent we can still talk about “Dutch design” nowadays as we live in a globalised world. The status of Dutch design has to be also understood from the perspective of maintaining an identity in the flowing and global world of design.

However, the roots of Dutch design can be identified even further than the 1990s, back to the 17th century. Starting with the work of Dutch silversmiths Adam and Paul van Vianen, decorative objects began to exhibit a local and personal identity that combined ingenuity with practicality. Additionally, cabinets became incredibly important to Dutch design, this preference making cabinets a powerful interior piece up to the 19th century. They stand out for their practicality-a hallmark of the Dutch style-as they offer a lot of storage space thanks to the many drawers they house. As time drew on, the development of Art Nouveau in the Netherlands gave Dutch designers yet another way to distinguish their craft. 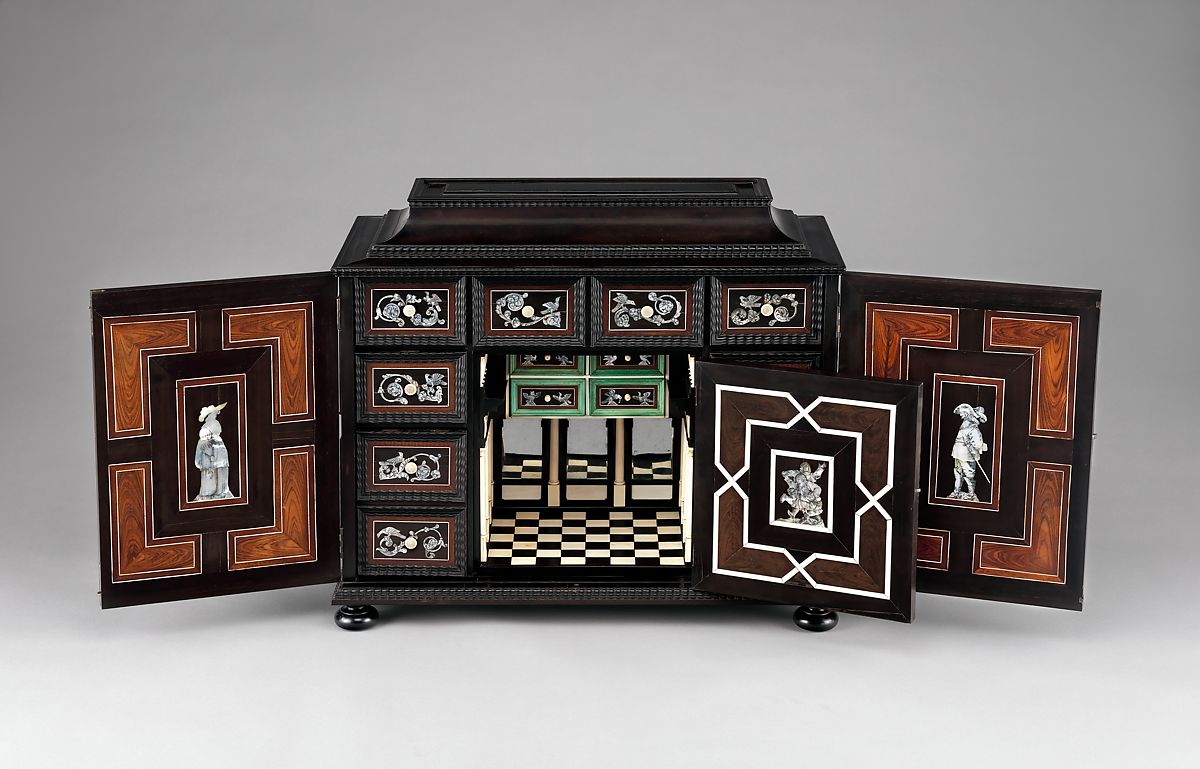 Cabinet, attributed to Herman Doomer, ca. 1640-50, black ebony and mother of pearl, via The Metropolitan Museum of Art, New York

Dutch Art Nouveau is mentioned as a source of influence for Dutch design as it established certain characteristics that were then transmitted into contemporary art. Dutch Art Nouveau rejected the flamboyant Art Nouveau known throughout the rest of Europe and instead searched for a form that would be consistent with the more sober art aligned with Dutch national identity.

Aaron Betsky, the former director of the Netherlands Architecture Institute, has the same idea of a national art style à la Dutch. When meditating on contemporary Dutch Design, Betsky claimed the physical qualities of the Netherlands are embedded into the characteristics of Dutch design. For him, the manufactured geography of the Netherlands becomes a metonymic device that facilitates spatial organisation as a political issue. The dykes and locks, together with the water management system, shaped the Dutch psyche and led to the development of a reasonable and somehow cosy modernism; that can also be seen as characteristic of Dutch culture at large. Practicality, accessibility, simplicity, and ingenuity are some of the main characteristics that distinguish the Dutch design of the interior, furniture, and other objects. De Stijl is a Dutch art movement founded in 1917 that equally influenced the development of Dutch design. De Stijl was made popular by artists such as Theo van Doesburg, Piet Mondrian, and Bart van der Leck as they strived to make a new and better world through their works. De Stijl advocated for abstraction as it was seen as a universal language that could go beyond any cultural barriers by reducing everything to its essence.

The De Stijl movement had a visible and expressed preference for primary colours and non-colours, using the principle of the geometry of the straight line, the square, and the rectangle to create objects and new pure forms. For example, the Red and Blue Chair, created by Gerrit Rietveld, is highly reminiscent of the work of Dutch design artist Richard Hutten, who seems to follow the lessons of De Stijl closely. As mentioned above, designer Richard Hutten, who works on furniture, product, interior, and exterior design, shows how deeply influenced Hutten was of the De Stijl. As part of the first generation of Dutch designers, his work takes an unexpected and humorous tone. Since the 1990s, he has run a design studio in Rotterdam, and his work is recognised in both Europe and the United States.

His furniture pieces can be categorised as part of “no sign of design,” meaning that the pieces have a somewhat dry look. This can be traced to the fact that Hutten was involved with the design movement Droog Design, characterised by a lack of visible interventions of the designer; thus, a dry design. Otherwise, his furniture pieces are highly functional and conceptual, with his well-known concept example of Table upon Table, which speaks for itself. His work stands out through simplicity and humour, as it surprises the viewer with its witty concept. Marcel Wanders first attracted public attention with his Knotted Chair in 1996 because it combined a number of elements such as high-tech materials, low-tech production methods, and an attractive design. Starting in 2000, he opened his studio in Amsterdam and later co-founded the design label Moooi. Knotted Chair, however, remains one of his most well-known and influential works in Dutch design.

What Wanders creates can be described as multi-layered because he doesn't make use of expensive materials; yet, those which are, are used in such a manner that the resulting object is produced in accordance with later production developments. His aesthetic element is also notable, for all of his designs have a simple, austere, yet appealing look. Some of his other notable objects include Egg Vase (1997), Snotty Vase (2001), and Carbon Chair (2004). He also designed a number of interiors that bear the same characteristics as his individually-designed works. Studio Wieki Somers is formed by the designer Wieki Somers and associate Dylan van den Berg. Somers is seen as a second-generation member of the Dutch design school, and she, together with those from the first generation, gained international attention through their works. What distinguishes the second generation from the first is the fact that they take the aesthetic aspect even more into consideration without renouncing the conceptual and the functional.

Somers believes that it is worth “realising the potential of everyday things by revealing their hidden beauty.” She translates this belief into her designs by using everyday items. She also incorporates foreign materials, new technology, and unexpected forms, combined with surprising functions and poetry. It is worth noting that in 2009, the studio won the Golden Eye at the Dutch Design Awards with their Merry-go-round Coat Rack designed for the Museums Boijmans in Rotterdam. The Dutch design movement combines a large spectre of influences that are gathered from Dutch art historical achievements. The end result is fresh, diverse, and intriguing, yet also simple, functional, and conceptual.

Explore our Design auctions, home to a range of pieces from the 21st century. Or register as a seller.